Before all of this Finland business, I plunked my money down to go to AWP in Minneapolis. Little did I know that I would be going on a world “tour” for a month, coming home exactly a week before I was set to hit AWP. 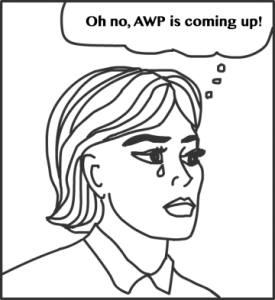 AWP–Association of Writers and Writing Programs–is the conference-slash-convention for writers, both known and unknown. It’s where you can have a story like “I was 10 feet away from Seamus Heaney!” because other people will have similar tales. (That one is mine, by the way. It was at AWP 2013 in Boston, right before the Muriel Rukeyeser panel…with one of my favorite poets, Sharon Olds.) It’s where they have the biggest book fair I’ve ever seen. It’s where they set up the bar at said book fair at 11:00 a.m. because writers.

I went to AWP in 2013, on the advice of my former professor, current friend, and dare-I-say mentor Rebecca Wee. I had never heard of such a magical fairy tale place. She didn’t go to the conference that year, but I did.  This hates-to-be-alone extrovert went to a place where I literally knew no one and after a few meals alone, met some fabulous people like Jessie Carty, Emily Lake Hansen, and Janet Dale.

I skipped last year because 1.) it was in Seattle and 2.) I instead used my money to fly to my aunt’s memorial in Philly. So I am itching to go this year. I know a few more people and have a few more successes (and failures) under my belt. But for all of my “experience” at this, I’m still trying to figure out if it’s okay to Fangirl my favorite writers and name drop people they would know that I know.

Google is not very helpful for this specific genre of AWP etiquette.

If you see this in time and are also headed to AWP, please let me know! It will save me from at least one meal alone.

One thought on “Fan-Girling at AWP”